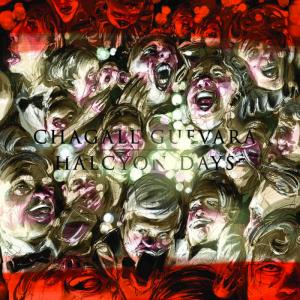 Not since the Clash has a group so effectively turned militant discontent into passionate rock & roll.”

NASHVILLE, TN, USA, July 1, 2022 /EINPresswire.com/ — Chagall Guevara, the beloved band that helped launch the Nashville rock scene into the national spotlight in the 90s, is back with their first album in thirty years. Out today on all digital platforms, Halcyon Days is a reunion three decades in the making: a fierce, burning collection of songs that are assertive, immediate, and remarkably timely. The band is celebrating their return with a show July 2 at Nashville’s legendary Ryman Auditorium.

Halcyon Days is a homecoming; a mixture of songs written both during quarantine and decades earlier that, against the odds, blends effortlessly. “Our band’s songwriting process is collaborative and chaotic,” Steve Taylor shares. “It typically starts with a riff Dave’s conjured out of his Les Paul, along with some snatches of melody, then it passes through the band’s months-long trial and error gauntlet until something emerges that sounds like us.”

A career with a rise and fall like a 90s band movie, Chagall Guevara began “lugging our gear around in a couple old station wagons to play bars and clubs in the South.” It was only a matter of months until they were flown out to LA to sign a big record deal with MCA and representation by legendary manager Elliot Roberts.

Their debut album garnered critical praise, including a review in Rolling Stone that raved, “Not since the Clash has a group so effectively turned militant discontent into passionate rock & roll.” A label mass exodus added to their challenges, but their touring prestige in the US and UK led to opening for bands like Squeeze, The Violent Femmes, and Drivin’ and Cryin,’ and, to their surprise, a devoted fanbase.

A Kickstarter campaign proposed by Taylor turned into a wildly successful venture, reaching its initial goal within the first 24 hours. It affirmed to the band what was sometimes difficult to discern before the era of social media: their music impacted people, and their fans still cared.

Chagall Guevara returned to the studio with their original co-producer, Matt Wallace (The Replacements, Faith No More, Maroon 5, Train, O.A.R.). Halcyon Days is bombastic, thought provoking, and rock & roll at its finest, from the band with a name you may have to Google.

To request press tickets to the Ryman please contact: tori@richlynngroup.com

Chagall Guevara was formed in 1989 by solo artist Steve Taylor, guitarists Dave Perkins and Lynn Nichols, drummer Mike Mead and bassist Wade Jaynes. The band, named after Cuban revolutionary Che Guevara and painter Marc Chagall, reunited in 2022 for a new album and show July 2nd at the legendary Ryman Auditorium in Nashville. Heralded as one of the first major rock groups to come out of “Music City” and find success, they were signed to MCA Records and toured the U.S. and U.K. with bands like Squeeze, The Violent Femmes and Drivin’ and Cryin’. The reunited band has added John Mark Painter (from Fleming and John) to the line up playing bass. Their highly anticipated nine-track Halcyon Days is the result of their wildly successful Kickstarter campaign and will be released July 1, 2022.