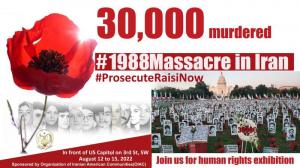 As head of Iran’s Judiciary, Raisi had a pivotal role in the bloody repression of November 2019 nationwide uprising…We would urge that Ebrahim Raisi be denied a US visa”

WASHINGTON, DC, UNITED STATES, August 5, 2022 /EINPresswire.com/ — Ebrahim Raisi, current Iranian president, is  supposed to speak at the UN General Assembly in September. This is a source of concern for the Iranian community in the US. Ebrahim Raisi took office as the Iranian regime’s president on August 3, 2021.

Elections in mullahs’ Iran are not free nor democratic. Raisi was handpicked by the regime’s supreme leader among several other candidates to run in a fake election among a fistful of puppet candidates. The Iranian people overwhelmingly boycotted the sham election, which saw the lowest turnout ever, even with hugely inflated official tallies. Khamenei’s primary intent for choosing Raisi was to quell protests and intimidate the restive society into silence as crises and popular protests continue to mount, bringing the Iranian society to the verge of explosion. Since the age of 19, Raisi, who lacks formal education, acted as an interrogator and prosecutor in various Iranian prisons, where several political prisoners were tortured and executed under his watch.

As a member of the ‘death commission’ in Tehran, Raisi was directly involved in the massacre of 30,000 political prisoners in 1988, 90% of whom were supporters and members of the main opposition Mujahedin-e Khalq (PMOI/MEK). He has been dubbed by people as the “1988 Henchman.” Iran’s 1988 prison massacre may amount, as mentioned in H. RES 118 signed by 257 House members, according to several UN experts and representatives, to “crimes against humanity”. Ebrahim Raisi is known to have played a vital role in the sinister event, and even boasted his notorious deed.

Even before taking office as “president”, Ebrahim Raisi, as head of Iran’s Judiciary, was designated by the U.S. Department of the Treasury’s Office of Foreign Assets Control (OFAC) on November 4, 2019, for having “participated in a so-called “death commission” that ordered the extrajudicial executions of thousands of political prisoners in 1988.” As head of Iran’s Judiciary, Raisi had a pivotal role in the bloody repression of November 2019 nationwide uprising in Iran, in which no less than 1500 unarmed demonstrators perished. Immediately after Raisi’s “election” in June 2021, Amnesty International affirmed that the latter “must be investigated for crimes against humanity.”

Many a member of our community has lost a relative to atrocities perpetrated by Raisi. The Iranian American community calls members to take part in a rally to be organized on September 21 in New York, before the UN Headquarters, to protest the presence of a man involved in crimes against humanity in the US and the UNGA. We would urge that Ebrahim Raisi be denied a US visa, even for visiting New York and the UNGA. The refusal would certainly make rejoice Iranian citizens, who have lost loved ones to the decades-long repression in the country. Mass murderers belong before International Courts of Justice, not the United Nations.

Join us on September 21st in New York.

Ebrahim Raisi Should be Investigated For Crimes Against Humanity in Iran, 1988 Massacre