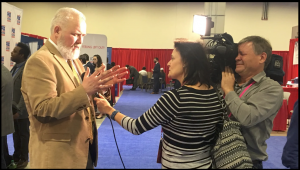 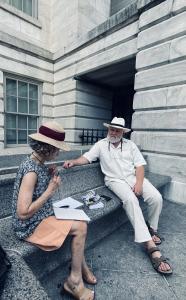 An interview at the Smithsonian National Portrait Gallery

…a work of art, as a self-portrait of the artist as Protestant Pilgrim. Must reading for anyone interested in America, Art, Law, Politics or Religion—or just in search of an entertaining read.”

The event, to be held on Saturday, October 22nd, starting at 1:00 pm and ending at 3:00 pm, includes book readings, presentations, a question and answer session, and a book signing with author Julian Raven. This is a free event that is open to the public without reservation. Copies of Raven’s new book will be available for sale at the event or online through Barnes and Noble, Amazon, and other major book retailers.

Raven’s odyssey, contained in his book, has been well documented in the press, especially by the prestigious and well-read Washington D.C. glossy magazine the Washingtonian. Senior Editor Andrew Beaujon’s recent article from September 28, 2022, sheds light on the current and ongoing legal war against the Smithsonian Institution, Raven’s new book, and other aspects of his political journey from formerly pro-Trump activist to calling former President Trump to resign after the events on January the 6th, 2021.

Other current interviews regarding ‘Odious and Cerberus’ can be seen on the media page at www.odiousandcerberus.com.

What people are saying about Odious and Cerberus:

“…a funny, revealing, and entertaining story of one man’s struggle against overwhelming odds.” Laurence Jarvik, Film Director and author of the expose’-

‘PBS: Behind The Screen’

“Julian Raven’s Odious and Cerberus is as timely a book as can be.”

“Your work is brilliant, no wonder the Smithsonian stiffed you!”

“Anyone who enjoys David & Goliath stories should read Julian Raven’s Odious and Cerberus.” Scott Douglas Gerber, Professor of Law at Ohio Northern University and author of, among other books, A Distinct Judicial Power:

“Julian Raven is an 18-wheeler crashing through our timorous barriers. Odious and Cerberus is a forceful love letter to America.” Ashok Panikkar, Founder, Meta-Culture, Thinking, and Human Engagement

“Bold!, Entertaining!… Raven’s love for God and country are inspiring!”

“The writing is crisp, clear, and heartfelt. It’s a deeply personal account of his thoughts, actions, and fights with bureaucracy. It’s a long read at 456 pages but moves quickly, and you are riding with him. Mr. Raven is a committed Christian. His life’s pursuits and his words are imbued with strong religious beliefs and Christian overtones.” Audrey Hoffer, Writer, and Free-Lance Journalist