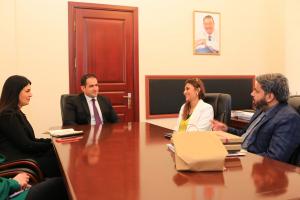 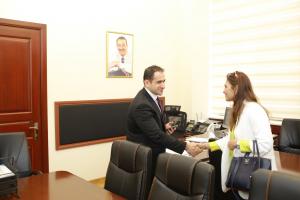 BAKU, AZERBAIJAN, May 14, 2022 /EINPresswire.com/ — A two-member delegation of the Bol Media Group, led by its Chairperson Ms. Ayesha Shaikh, called upon Mr. Elnar Aliyev, the First Deputy Minister of Culture, Republic of Azerbaijan at his office in Baku, and discussed the role of the media in promoting cultural ties between Pakistan and this important Central Asian nation.

Ms. Shaikh thanked Mr. Aliyev for providing a glimpse of the rich cultural heritage of Azerbaijan and the steps being taken by his ministry to promote it at various levels.

“There are a lot of cultural similarities between Pakistan and Azerbaijan, which share the common faith and the special bond of Islam,” Ms. Shaikh said.

She said that the region comprising Pakistan has centuries’ old relations with Azerbaijan, which is reflected in the shared ethos of poetry, music and literature between the two nations.

Ms. Shaikh introduced the Bol Media Group – Pakistan’s largest multi-media enterprise – to the honourable minister, saying that the signing of the memorandum of understanding (MOU) with Azerbaijan’s state-run AzTv will open new doors and venues of information exchange and further strengthen the cultural ties between the two countries.

“Bol Media Group will do its bid to boost the people-to-people relations between the two countries by introducing to the Pakistani viewers and readers the business and investment and tourism opportunities in Azerbaijani.

She also floated the idea of holding joint cultural events, producing content for television and print and other commercially viable ventures between the Pakistani and Azerbaijani media outlets.

“Bol Group being the largest, and most modern media enterprise has all the depth and technological and human resource expertise to plan and execute such ventures,” Ms. Shaikh said.

Automotive Bearing Market to Expand at a CAGR of ~6%