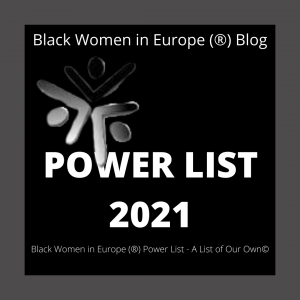 “Our 15th year of blogging completely snuck up on me. Taking on a new partner, Power Lister Angela Fobbs, has already paid dividends. She is responsible for reminding me”.”

SWEDEN, December 6, 2021 /EINPresswire.com/ — The Black Women in Europe™ blog, created in 2006 by Adrianne George, released its 12th Black Women in Europe™: Power List 2021 – A List of Our Own©. This 12th year we feature 5 women as our blog celebrates our 15th anniversary. The awardees are in the following categories: Athletics, Beauty Queens, Corporate EU, Fashion, and Politics.

“Our 15th year of blogging completely snuck up on me,” George admits. “Taking on a new partner, Power Lister Angela Fobbs, has already paid dividends. She is responsible for reminding me”.

In 2010 the Black Women in Europe™ Blog released its first Power List naming 58 women across Europe in 6 categories. Over the last 12 years, over 180 women have been included on the Black Women in Europe™: Power List – A List of Our Own©. It was the first and remains the only one of its kind that celebrates the achievement of black women across Europe. This year marks the first time that three women have been named twice in two different years.

The previous lists combined have received well over 360,000 views on Slideshare and are presented in alphabetical order. They are intended to acknowledge powerful black women in Europe and to inspire others to reach their full potential. The lists do not aim to assess rank but rather to showcase influential women who, in some cases are well known and in others, are women who should be known.

This is the 8th year the list contains a call to action to join the Black Women in Europe™ Kiva Lending Team which has grown to 15 members. It is the 6th year that the Power List is dedicated to Derek McCullough, former List creative director, who died in 2015.