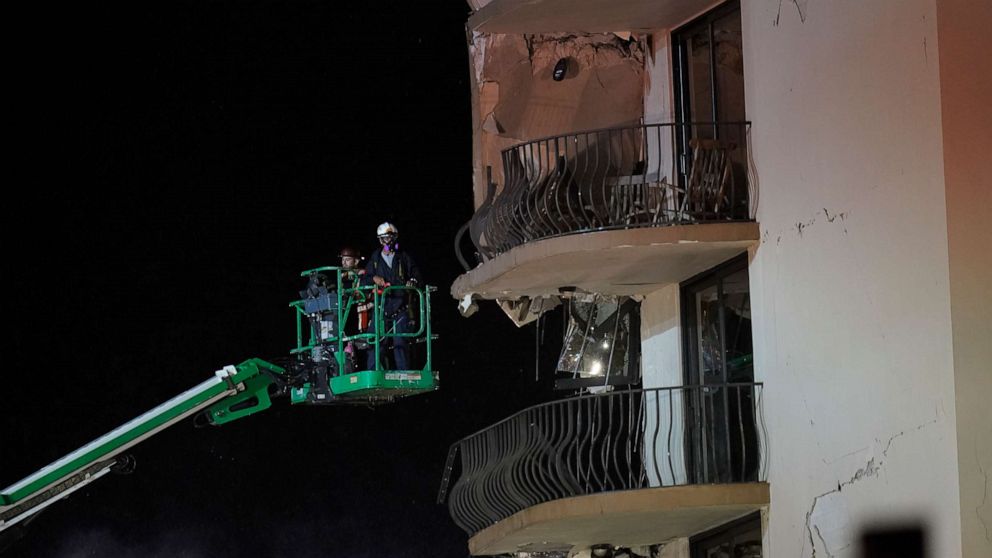 A White House statement released at around 1 a.m. ET confirmed the president authorized the Department of Homeland Security (DHS) and the Federal Emergency Management Agency (FEMA) “to coordinate all disaster relief efforts which have the purpose of alleviating the hardship and suffering caused by the emergency on the local population, and to provide appropriate assistance for required emergency measures…”

FEMA is authorized to identify, mobilize and provide equipment and resources to alleviate the impacts of the emergency, the statement read. That includes “debris removal and emergency protective measures, including direct federal assistance.”

Workers use a lift to investigate balconies in the still-standing portion of the building, as rescue efforts continue where a wing of a 12-story beachfront condo building collapsed, late on Thursday, June 24, 2021, in the Surfside area of Miami.(AP Photo/Gerald Herbert)

Authorities are investigating the collapse, and rescue efforts remain in effect.

So far, crews have rescued 35 people who were trapped in the building and two others from beneath the rubble, according to Miami-Dade Fire Rescue Assistant Chief Raide Jadallah.

Share
Facebook
Twitter
WhatsApp
Previous articleI owe it all to my family – Gaurav Aggarwal the Sleek founder
Next articleBest Stocks To Buy This Week? 4 Names To Know
RELATED ARTICLES
International