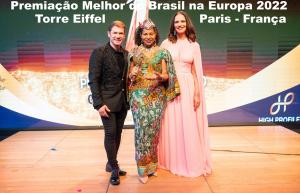 NEW YORK, NEW YORK, USA, October 5, 2022 /EINPresswire.com/ — For the first time in history, Luiza Brunet and Rafael dos Santos presented an award to the Brazilian Community in one of the world’s great landmarks, The Eiffel Tower in Paris.

High Profile Magazine held the award ” Best of Brazil European Awards 2022″ for the third consecutive year in the city of Paris receiving Brazilians from 16 European countries for the award ceremony that was held on the world-famous Eiffel Tower on September 25th.

The Best of Brazil European Awards took place at the Gustave Eiffel Lounge, on the 2nd floor of the world-famous Eiffel Tower in Paris. This was a three-part event held annually to honor and unite the Brazilian community abroad. Eiffel Tower was chosen for the awards ceremony who honored 22 people and with an audience of more than 150 guests, with the participation of Her Majesty Queen Diambi Kabatusuila – Queen of Congo – who presented the “International Award Queen Diambi of Race Inclusion ” for those who worked on the insertion of Afro-descendants in their companies. Before appearing in Paris, Queen Diambi had come to New York to participate in the 77 UNGA at the UN.

It was the first time in world history that an award ceremony for Brazilians took place in this global icon of culture since it was built in 1889. It made everyone emotional not by only helping to raise the feeling of patriotism, but they were also greeted by their home flag even residing in an European. In addition, there were various attractions such as the Brazilian Folk Dance from the Amazon conducted by Stella Rocha and a trio of violinists praising our popular music.

The presentation was made by actress and activist Luiza Brunet and also by the event’s creator and organizer, businessman Rafael dos Santos. According to Rafael, “It is with great pride that we are showing the strength, dedication, and work of Brazilians abroad. And this year, in addition to the 22 categories for the community, there were also eight specials, such as the “Luiza Brunet Award for Combating Violence Against Women”, “The International Pride LGBTQ+ Award”, and “The Disabled Inclusion award”. Luiza Brunet commented that she feels extremely proud to be able to be part of such an important award for the Brazilian community and was flattered to have an award in her name. “The Award helps to give even more voice to Brazilian and immigrant women, not only in Brazil but all over the world”.

In addition to the award, High Profile Magazine decided to honor its guests with a sightseeing city tour to famous Parisian places such as Louvre Museum, Arc de Triomphe, the Palais de Chaillot, and Champ de Mars. At the end of the day, there was a nice picnic on the beautiful square Champs de Mars near the Eiffel Tower. Then in the evening, there was an unforgettable Masquerade Ball with Luiza Brunet . It was a moment of fun and a lot of glamor with everyone’s favorite mask at Labo Bar Club and a dinner with some guests and speakers and finally the award for the best of Brazil in Europe.