Bertila Damas Joins The Cast Of Home Economics On ABC 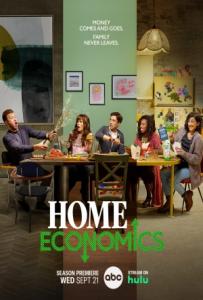 Home Economics is an American sitcom series created by Michael Colton and John Aboud. It is the story of three grown-up siblings who find themselves living at vastly different levels of financial security from one another.

“I am grateful for the opportunity to work with such a great cast. The energy on set was amazing. Looking forward to this new season of Home Economics” said Damas about her new show.

Bertila Damas was born in Cuba to a Puerto Rican-American mother and a Cuban father. She is the eldest of 3 children born to Maria and Francisco Damas. Along with her siblings, Nancy and Francisco, Bertila grew up in New York and Miami.

Her work has been consistently admired in publications like Variety, the LA Times, Curtain Up and others.

Her love of acting began at an early age. As a teen, Damas won numerous awards for her school Debate team in statewide and national Dramatic Interpretation competitions, garnering a 3rd place win nationally as a junior high student competing amongst high schools. She began her formal professional work in Miami working in Spanish speaking theater and television while attending college. She went on to study further in NYC. With the help of a dear friend, she won an audition and was accepted to attend the prestigious Circle in the Square Professional Theater School where she met Terry Hayden who in turn introduced her to the Actor’s Studio and Lee Strasberg. She observed regularly until Strasberg’s death and beyond. Simultaneously, she studied with Stella Adler as an advanced acting student and in Adler’s acclaimed Script Analysis classes.

Her career spans stage, film, television, off-Broadway and regional theater. Her Broadway debut was playing Juliet in Romeo & Juliet for Joseph Papp’s NYSF on Broadway, directed by Academy Award-winning actress Estelle Parsons. In regional work, she played the title character in a stage production of Federico García Lorca’s Yerma at the Arena Stage. She received a Garland Award Honorable Mention in 2006.

On international Spanish television stage, Damas is known for her role as the villainous Marta on Angélica, Mi Vida for Telemundo. She has been seen and heard in dozens of commercials and voice-overs in both English and Spanish.

Bertila Damas is represented by The House of Representatives and Espada PR & Entertainment.

She is available for interviews starting on September 12, 2022.