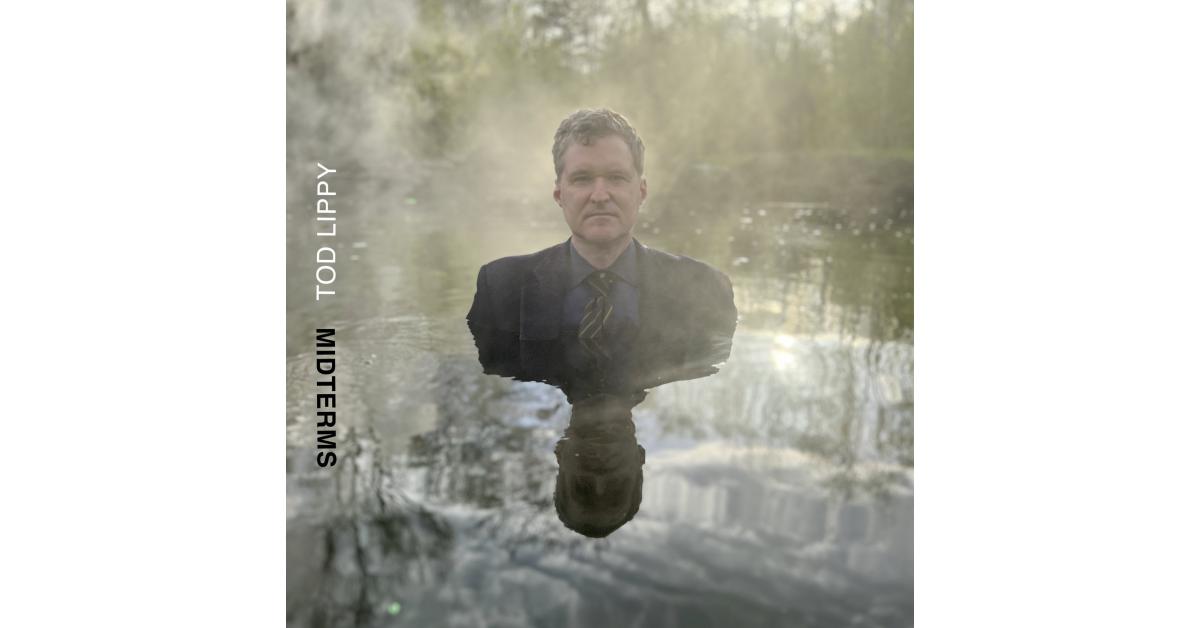 Midterms is the third album from Lippy following the well-received LPs Here We Are (2019) and Yearbook (2021), both produced by the legendary Kramer (Low, Galaxy 500).

The message behind the rest of Midterms EP is anything but vague: “This country is grappling with a dark period of hyper-polarization, distrust in institutions, and economic instability,” Lippy says. “Midterms is my attempt to come to terms with, and maybe even try to make some sense of, this reality.” The other songs on the album deal with issues ranging from toxic television personalities and celebrity culture to armchair activism and apathy in general.

For a preview of “Happy Ending” one of the tracks on the new Album to be released July 15 please follow this link https://bit.ly/3nrX5kU

Acclaimed artist Steve Keene, perhaps best-known for his iconic album art for bands like Pavement, The Apples in Stereo, and Silver Jews, has painted a series of 7 different covers on 50 chipboard sleeves containing the forthcoming lathe-cut 10” vinyl release of “Midterms” (out in August). The paintings include Keene’s interpretations of the EP’s original cover in addition to 6 images corresponding to each track on the release.

Lippy has always been at the forefront of creating art that helps find meaning in life. Starting in 2003, he produced ESOPUS, the esteemed arts publication declared “a thing of lavish, eccentric beauty” by The New York Times. For his “one-man magazine,” Lippy handled all design, editing, publishing, distribution, and selection of/interaction with contributors, ranging from writers like Karl Ove Knausgaard and Francine Prose to art world superstars like Jenny Holzer, Marilyn Minter, Anish Kapoor, and Kerry James Marshall, from filmmakers such as actor Lisa Kudrow and director David Lynch to musicians and composers like Kimya Dawson, Sharon Van Etten, and Carter Burwell.

The work led to a partnership with several New York city institutions including MoMA, New York Public Library, The Kitchen, and National Sawdust to create performances, exhibitions, lectures, and other events. The nonprofit corporation formed to serve as the umbrella organization for all activities, The Esopus Foundation Ltd., received major funding from organizations ranging from the NEA to The Andy Warhol Foundation.

Lippy has also made a name for himself as a book designer (most recently creating the cover for Louis Menand’s critically acclaimed The Free World (FSG); artist (earning a coveted MacDowell Colony Residency in 2018 to complete a series of drawings related to his work on Esopus); curator (responsible for exhibitions at White Columns and Pioneer Works, among other venues); writer for Artforum and other publications; and filmmaker, whose 2000 short film Cookies played at 20 film festivals around the world.

Tod Lippy may be best-known as the creator of the award-winning arts journal ESOPUS, the multidisciplinary publication that attracted readers from around the world over the course of its 25-issue run and is now in the permanent collections of The Museum of Modern Art and the Library of Congress, among many other institutions. Every issue of ESOPUS included a CD of brand-new music Lippy commissioned from musical acts such as Grizzly Bear, Dirty Projectors, Neko Case, Cloud Nothings, and Kimya Dawson. Lippy, who studied classical guitar for over a decade, was inspired by their contributions to start making music on his own. When ESOPUS ceased publication in 2018, he started spending a significant amount of time honing his songwriting and recording skills.

In the summer of 2019, Lippy sent a selection of 30 demos to Luna front man Dean Wareham, who connected him with Kramer, the producer and musician whose iconic work includes all three of Wareham’s first band Galaxie 500’s seminal records. Kramer and Lippy mixed 10 tracks for his first album, Here We Are, in New York City late that summer, and the album was released in October. Its lead single, “Good Start,” was selected by L.A. radio station KCRW for a coveted “Today’s Top Tune” slot on Labor Day 2019.

In April 2020, Lippy recorded and created a music video for his standalone single “Wrap Your Troubles in Dreams” — a cover of the 1931 Bing Crosby Depression-era classic — as a response to the Covid pandemic. While in isolation that spring and summer, he began writing and recording material for his second LP, Yearbook, which was released digitally and as a limited-edition CD, on June 25, 2021.

The 10-song album received substantial critical acclaim — Vents called it a “brilliantly human album” and it was declared “an exceptional sophomore effort” by Take Effect. Yearbook spawned three singles: “Names,” which was also released as a 7” lathe-cut vinyl single by Toronto label We Are Busy Bodies; “Ambitions,” whose haunting music video was shot in Lippy’s abandoned high school; and “Appian Way,” with an accompanying video directed by Charlie Theobald.

Lippy worked again with Lipstein and Smigelskiy on a 6-song EP, Midterms, that will drop in July 2022. Its first single, “Assorted Hits 11,” hit digital outlets on April 22; it’s also available as a limited-edition cassingle.