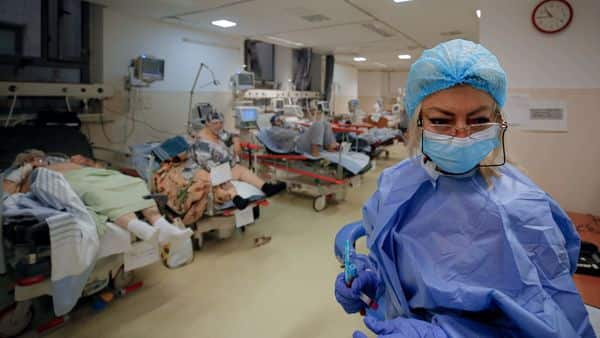 A widely available antidepressant holds promise as a treatment for Covid-19, according to a new study.

Covid-19 patients who received fluvoxamine were significantly less likely to require hospitalization than those who didn’t, in the largest clinical trial evaluating the antidepressant’s effect on Covid-19 to date.

Fluvoxamine belongs to a class of antidepressants called selective serotonin reuptake inhibitors, or SSRIs. It is commonly used to treat obsessive compulsive disorder and is also prescribed for depression. In use for decades, fluvoxamine has been shown to be safe and costs about $4 for a 10-day course, said Edward Mills, one of the study’s lead researchers and a professor of health sciences at McMaster University in Hamilton, Ontario. He said fluvoxamine’s low cost and wide availability make it a compelling alternative to other Covid-19 therapies including monoclonal antibody treatments, which are costly and require an infusion. Another treatment, Merck & Co. and Ridgeback Biotherapeutics LP’s experimental molnupiravir pill, will cost the U.S. government around $700 per course in the U.S.

“For both poor countries and even wealthy countries, it’s a great option,” Dr. Mills said of fluvoxamine.

Past research suggests that fluvoxamine has anti-inflammatory properties, though scientists are still unsure of exactly how it works against Covid-19, said Dr. Mills. The drug may help blunt the out-of-control inflammation that can cause severe disease in Covid-19, he said.

Other antidepressants, such as fluoxetine, which has the brand name Prozac, may have similar benefits against Covid-19, but that’s still being studied, he said. Dr. Mills says he and his colleagues are starting a trial looking at the effect of fluoxetine and inhaled steroids on Covid-19.

For their trial of fluvoxamine, Dr. Mills and his colleagues looked at 1,497 patients in Brazil who had Covid-19 and at least one known risk factor for severe disease, such as diabetes, heart disease, lung disease, or being 50 years old or older. Researchers gave around half the patients fluvoxamine twice a day over 10 days while the other half received a placebo, and compared rates of hospitalization between the two groups.

The researchers found that patients who received fluvoxamine were 32% less likely to be hospitalized than those in the placebo group. Among patients who stuck to the regimen closely and reported taking the drug or placebo for at least eight days of the 10-day course, there was an even bigger difference—a 66% reduction in hospitalization and 91% reduction in death rates.

“This is exciting data,” said Daniel Griffin, chief of infectious disease at healthcare-provider network ProHealth New York, who wasn’t involved in the study. “There are several other trials that are in progress and if they confirm this finding, this may end up being standard of care.”

The results, published Wednesday in the Lancet Global Health, were so stark that the study’s data-monitoring committee recommended that it be stopped early because there was no more scientific advantage to continuing, Dr. Mills said.

Dr. Mills said he and his colleagues have presented their research to the National Institutes of Health and World Health Organization. The NIH previously said it needed more evidence before issuing a recommendation for or against the use of fluvoxamine in Covid-19 patients.

Other studies also have suggested fluvoxamine could help treat Covid-19. A much smaller trial of 152 people, published in December, showed that none who received fluvoxamine got significantly worse within 15 days, while six of those who got the placebo did. Only one person who got fluvoxamine during the study was hospitalized, while five of those receiving the placebo had to be hospitalized. Another study, published in February, looking at 113 patients who tested positive for Covid-19, suggested that those who took fluvoxamine were less likely to have persistent Covid-19 symptoms and be hospitalized.