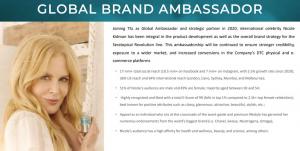 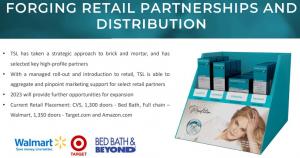 Retail Partnerships with Walmart and Target 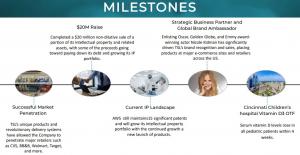 We are very pleased with our results and accelerating sales in Q3 which reflects the trajectory of the business. The proceeds from the asset sale will enable us to invest in the future of CURR”

 $20 Million from asset Sale of a Portion of Platform Technology IP.

 New Board Members and Other Appointments Strengthen Corporate Structure.

CURR will continue down the path of creating new innovative technology that will be part of its incubator strategy while continuing to develop, produce and market in the wellness and beauty sectors through its wholly-owned subsidiary The Sera Labs, Inc. utilizing cutting-edge technology and high-quality products that use science-backed, proprietary formulations. CURR products are sold Direct to Consumers with a subscribe and save option, as well as in major national drug, grocery chains, and mass retailers.

On November 22nd CURR announced results for the quarter that ended September 30, 2022.

Gross margins for the third quarter improved by 123 basis points to 80.0% in 2022 compared to the same period in 2021 with expectations of continuing high-margin sales with our new marketing initiatives.

SG&A expenses (excluding non-cash charges) for the third quarter decreased by $0.1 million in 2022 compared to 2021.

Other operational highlights during the third quarter of 2022 included:

CURR completed the sale of a portion of its platform technology intellectual property portfolio and related assets in July 2022 for $20 million of non-dilutive capital in total consideration. A portion of the cash proceeds was used to pay down certain debt obligations and the balance will be used for working capital and to grow the CURR intellectual property portfolio and its wellness and beauty brands. CURR retained 15 of its patents and will continue to be an incubator for future technologies and patents, which it intends to monetize through the commercialization of the technologies through product development or through the licensing or sale of the technologies.

CURR is focused on becoming the future of wellness with its long-term growth strategy to increase revenue with high margins by using its incubator strategy, product development, and marketing through strategic partnerships and geographic licensing deals. These initiatives, along with the CURR relationships with Nicole Kidman and other major social media influencers, will also help propel its health and beauty brands to become household names and the Company to become a genuine house of recognizable and respected quality brands.

The CURR wholly owned subsidiary, The Sera Labs, also announced that six SKUs of its Seratopical Revolution skincare line with P3P, the proprietary delivery system, are now being sold at 1,372 Walmart Stores as well as on Amazon.com.

Sera Labs also has garnered placement for its revolutionary oral thin film strip, Nutri-Strips™ on shelves at CVS, Amazon.com, and Target.com. Nutri-Strips are proprietary to Sera Labs and are the result of years of research.

CURR recently enhanced the reach and visibility of its Brand Ambassador, actress Nicole Kidman, as part of the launch of its new transformational

Seratopical Revolution and Nutri-Strips marketing campaigns and the unveiling of a revolutionary new delivery system for the CURR plant-based skincare line. Nicole Kidman and the CURR CEO will have more prominence in these multi-faceted marketing programs including recent articles in Forbes and Impact Wealth. To view the articles, click on the following links:

Forbes Oct 31, 2022 – Nicole Kidman Talks Skincare And The Beauty Essentials She Always Has In Her Bag

On August 2, 2022, CURR announced the appointment of Gerald Bagg to its Board of Directors. This strategic addition adds depth to CPG and advertising. A 45+ year veteran of the advertising industry, Gerald is best known for pioneering the BRAND RESPONSE advertising approach to campaigns. He is the Chairman and a co-founder of Quigley-Simpson Inc., a more than twenty-year-old full-service advertising agency specializing in strategic planning, marketing, media planning and buying, brand building, creative development, and production. Quigley-Simpson’s clients include some of the largest consumer goods companies with some of the most well-known brands in the world including over 60 brands from Proctor & Gamble.

On August 16, 2022, CURR announced the appointment of former CURR CEO Rob Davidson as Chairman of its Board of Directors. In addition, CURR announced the appointment of Robert J. Costantino to its Board of Directors and he has also been appointed as Chairman of the CURR Audit Committee. Rob Davidson brings a deep understanding of the CURR pipeline and provides expertise in continued new product development, patent creation, and continuity in non-dilutive ongoing deal transactions as well as years of public company experience. Rob Costantino brings a unique combination of decades of financial expertise, investing experience and shareholder advocacy, operational experience, and many years of negotiating success in closing multi-billion-dollar total company and asset sales to S&P 500 companies.

During the third quarter, CURR participated in three investor conferences in New York, Florida, and California making presentations to investors, meeting with potential business development partners, and conducting one-on-one meetings with investors. To view a replay of the CEO’s October 25th presentation and Q&A click on the following link:

The CURR CEO also recently presented and held one-on-one meetings with investors at the following investor conference with others to follow:

In summary, the recent $20 million asset sale has helped CURR increase its cash position and strengthen its balance sheet. Since the announcement of that non-dilutive deal and positive management and Board of Director additions, CURR has been working diligently on several initiatives aligned with its guiding vision of enhancing shareholder value by utilizing proprietary technology to differentiate CURR from its competition and producing quality high-margin products with improved safety, efficacy, and consumer experience.

The new marketing programs are showing early encouraging results, as CURR continues to focus heavily on accelerating its high-margin sales in the U.S. as well as increasing international presence and sales in the coming year, which is supported by continuing work on new products and patents.

DISCLAIMER: The products mentioned are THC-free and/or compliant with the 2018 Farm Bill.

Veripath Farmland Partners is pleased to announce the recent acquisition of 3,026 acres of Alberta farmland

Veripath Farmland Partners is pleased to announce the recent acquisition of 3,026 acres of Alberta farmland