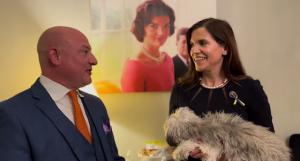 Rep. Nancy Mace and Marty Irby in March of 2022 in Washington, D.C. discussing the FDA Modernization Act, and Minks Are Superspreaders Act 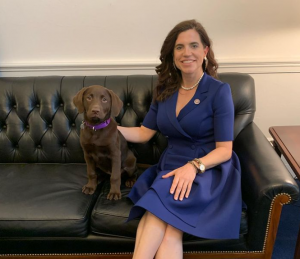 We congratulate Nancy Mace and her entire team on a decisive victory tonight and our group plans to continue working to ensure her reelection in November’s general election.”

“We congratulate Nancy Mace and her entire team on a decisive victory tonight and our group plans to continue working to ensure her reelection in November’s general election,” said Marty Irby, executive director at Animal Wellness Action. “I’ve never seen a more hardworking and effective first-term Member of Congress and believe her caring instincts toward animals and the people of her district, her dedication, and her unparalleled work ethic helped carry her to victory.”

Animal Wellness Action endorsed Mace in the primary and invested in independent expenditures in this race highlighting Mace’s work for animals, reaching thousands of pet lovers and other animal welfare advocates in the district.

Nancy Mace is leading on a range of animal protection and sustainable agriculture measures in the U.S. House, including these reform efforts:

· Mace is working to stop needless, costly, and inhumane animal testing. She joined Reps. Buddy Carter, R-Ga., and Vern Buchanan, R-Fla. and Senator Rand Paul, R-Ky. in leading the charge to pass the FDA Modernization Act that would end animal testing mandates at the FDA by amending the 1938 statute – a Depression-era requirement for animal testing for all new drug development protocols and allow for alternative methods when validated through the U.S. House last week. The FDA Modernization Act passed as a rider to H.R. 7667 by a vote of 396 – 28 last Wednesday.

· Mace is coauthor of a measure to ban mink farming, which is an export industry with nearly all of the pelts sold to China and the number one zoonotic disease threat when it comes to spawning COVID-19 variants. It makes little sense to keep afloat a dying, subsidized mink industry that threatens human and wildlife health for a luxury fashion item. It is entirely an export market, with nearly all pelts sold to high-end consumers in China. China’s elites get the coats and they outsource the viral risk to our homeland. Mace shepherded an amendment that mirrors the stand-alone bill to passage in the House in February.

Mace led a letter to the U.S. Postal Service Inspector calling on the Inspector to crackdown against illegal animal fighting shipments to Guam and other countries throughout the world. Animal fighting is bound up with illegal gambling, narcotics trafficking, and human-on-humane violence.

Nancy Mace has cosponsored every major animal welfare reform in Congress that AWA has asked her to join including the following:

· Mace cosponsored the Big Cat Public Safety Act, that would bar private citizens from keeping dangerous carnivores like lions and tigers in our communities;

· Mace cosponsored the Bear Protection Act to combat poaching of bears for their gall bladders;

· Mace cosponsored the Greyhound Protection Act that would wipe out the last remaining tracks operating in the U.S.

· Mace cosponsored the PREPARED Act that would help both animals and pet owners in times of crisis like Hurricane Florence that brough widespread flooding to the Palmetto State in 2018;

· Mace cosponsored the Shark Fin Sales Elimination Act that would ban the trade in shark fins in the U.S.;

· Mace cosponsored two bills that would better protect our iconic American equines: the SAFE that would permanently outlaw horse slaughter on U.S. soil and PAST Act that would help end the soring of Tennessee Walking, Racking, and Spotted Saddle Horses.

Animal Wellness Action is a Washington, D.C.-based 501(c)(4) organization with a mission of helping animals by promoting legal standards forbidding cruelty. We champion causes that alleviate the suffering of companion animals, farm animals, and wildlife. We advocate for policies to stop dogfighting and cockfighting and other forms of malicious cruelty and to confront factory farming and other systemic forms of animal exploitation. To prevent cruelty, we promote enacting good public policies and we work to enforce those policies. To enact good laws, we must elect good lawmakers, and that’s why we remind voters which candidates care about our issues and which ones don’t. We believe helping animals helps us all.