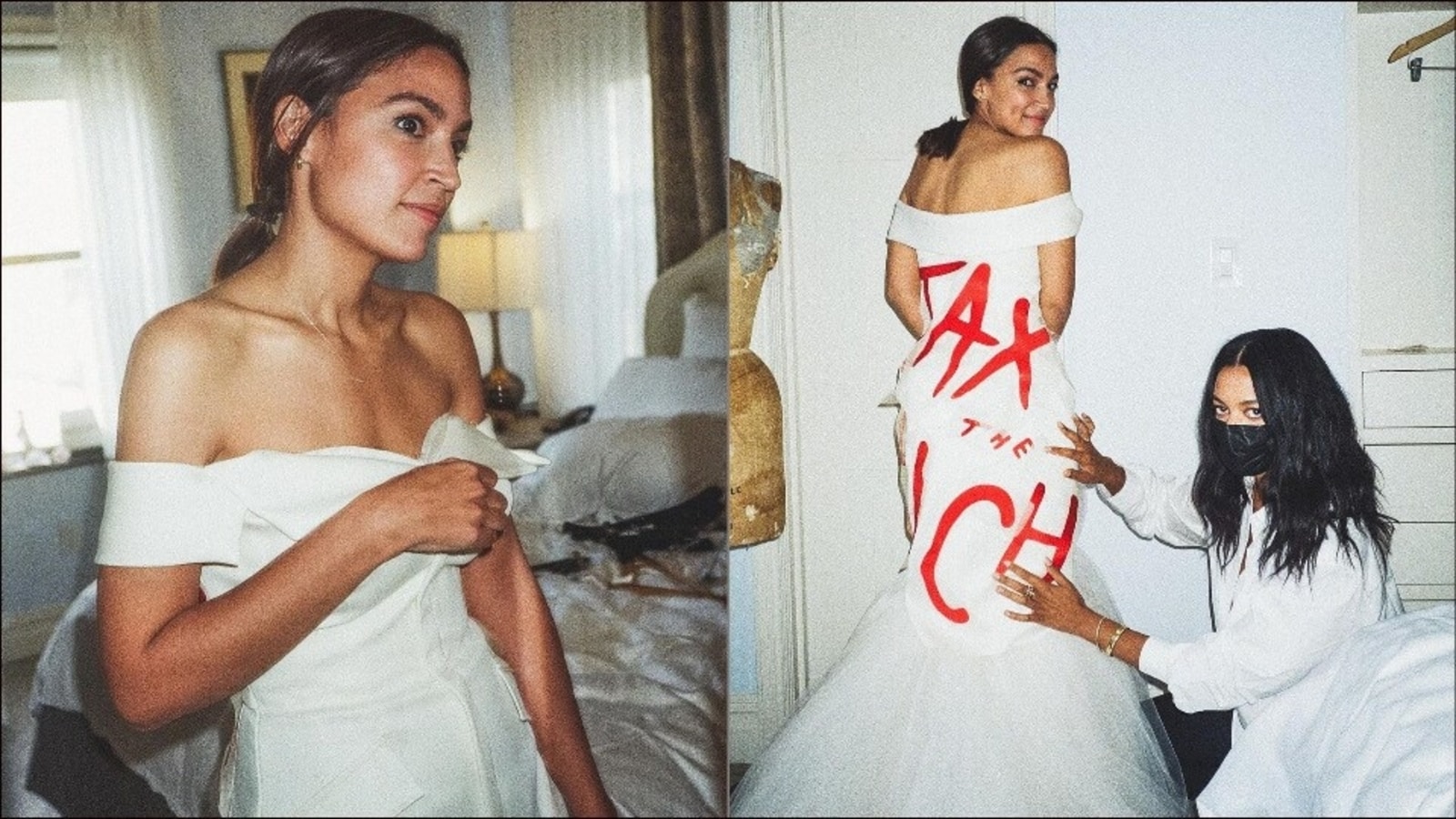 The only one to use her time on Met Gala 2021’s red carpet to make a controversial political message, US Congresswoman Alexandria Ocasio-Cortez grabbed eyeballs for her white off-the-shoulder gown with ‘Tax The Rich’ written in bold red. The Democratic-Socialist congresswoman made the political statement at fashion’s glitziest night and her first Met Gala appearance and we are not surprised, only in awe because who else would dare to do that at a spectacle of luxury and opulence if not AOC.

Taking to her social media handle, AOC credited an “all-BIPOC/women/LGBT+ team” for her hair, makeup, dress and styling look at the high fashion fête. The move comes after she proposed taxing the wealthy up to 70 percent, in 2019, to help fund the Green New Deal.

For the uninitiated, AOC also sells a “Tax the Rich” sweatshirt on her website but her ‘Tax The Rich’ gown at this year’s Met Gala is credited to Aurora James’ label ‘Brother Vellies’. Seizing her chance to use the Met Gala 2021 medium as a great platform to make a statement, AOC intentionally graced the red carpet in the white off-the-shoulder gown that came with ‘Tax the Rich’ emblazoned down the back in bright red letters, given that the Met Gala tickets cost up to $35,000 each.

The gown was designed by Brother Vellies’ founder and creative director, Aurora James and the bottom curve of the letter “C” in “rich” perfectly mirrored the tulle hem. Completing her attire with a pair of red heels from Brother Vellies that sported long red laces and bright flowers, AOC made sure to drive the message home by accessorising her look with a bag that also read “Tax the Rich”.

Pulling back her sleek side-parted tresses into a low ponytail hairstyle, AOC opted to go sans jewellery except for a pair of earrings. She shared on Instagram, “The medium is the message.. Proud to work with @aurorajames as a sustainably focused, Black woman immigrant designer who went from starting her dream @brothervellies at a flea market in Brooklyn to winning the @cfda against all odds – and then work together to kick open the doors at the Met (sic).”

AOC added, “The time is now for childcare, healthcare, and climate action for all. Tax the Rich (sic).” Elaborating on her wardrobe choice, she concluded by writing, “And yes, BEFORE anybody starts wilding out – NYC elected officials are regularly invited to and attend the Met due to our responsibilities in overseeing our city’s cultural institutions that serve the public. I was one of several in attendance. Dress is borrowed via @brothervellies . All-BIPOC/women/LGBT+ team: @cygmakeup, @ewilliams_hair @aurorajames (sic).”

In a red carpet interview, Alexandria Ocasio-Cortez revealed, “When Aurora and I were first kind of partnered, we started having a conversation about what it means to be working class women of colour at the Met. And we said, you know, we can’t just play along but we need to break the fourth wall and challenge some of the institutions. And while the Met is known for its spectacle, we should have a conversation about it.”

About AOC’s look, Aurora asserted in a prior interview, “We can never get too comfortable in our seats at the table once they’ve been given. We must always continue to push ourselves, push our colleagues, push the culture and push the country forward. Fashion is changing, America is changing.”