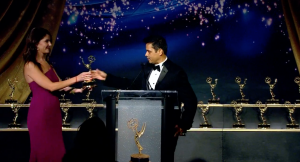 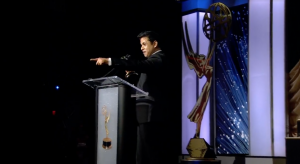 Jaswant wins an Emmy: Shrestha said in a star-studded award ceremony, “It’s an honor to represent Nepal and Nepali culture.”

Producing and Directing the “Festivals” series was my effort to help preserve and introduce Nepali culture to the world.””

Shrestha has received Nine-Emmy nominations in various categories over his career, making him the only Nepali filmmaker receiving such an honor. However, this award marks his first EMMY win.

Mr. Shrestha was also the Writer, Editor, and Producer of all three of this year’s nominated documentaries “Festival of Dashain,” “Festival of Saraswati Puja,” and “Festival of Maha Shivaratri.” These nominated episodes are from a 5-part Docu-Series, “Festivals,” that sets out to explore Nepal, unfolding the myths, legends, and ancient traditions while experiencing the divinely inspired mystical cultures and the diversity of Nepalese people. The winning episode is based on Hindu Goddess Saraswati, popularly known as the Goddess of music and knowledge.

While receiving his award, Jaswant thanked the members of the Television Academy who voted for him. In addition, he thanked his cast, crew, and his family. Mr. Shrestha said he spent three years making the “Festivals” series, which is a labor of love. Producing and directing this series was his effort to help preserve and introduce Nepali culture to the world. He further said that because he lives and works in Hollywood, he doesn’t get a chance to go to Nepal often, so making the “Festivals” series and taking home an EMMY Statuette is his way of sending a love letter to his native country.

Bioherbicides Market Estimated to Exceed US$ 4.35 Billion Globally By 2027

Bioherbicides Market Estimated to Exceed US$ 4.35 Billion Globally By 2027