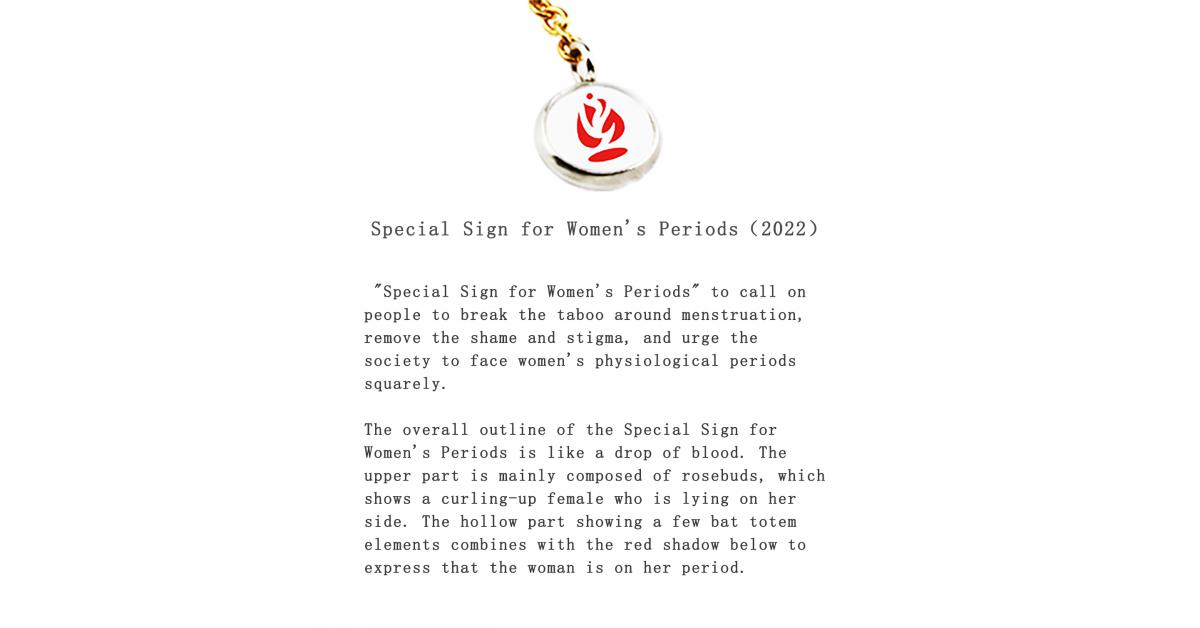 A girl from a university in UK, has exquisitely made a “Special Sign for Women’s Periods” to call on people to break the taboo around menstruation.

In recent years, “menstrual shame” has become one of the most searched topics on the Internet, which caused heated discussion among netizens. Some women said they had never felt ashamed of menstruation and they even could talk about it openly. Some others said they felt period-shame when they were young; however, this feeling gradually disappeared as they grew older…

It is believed that most girls feel embarrassed or even ashamed to talk about periods when they are young. They hesitate to tell others when they feel sick during the periods; they even feel uncomfortable buying sanitary essentials from shops and try to “cover up” the embarrassment with black plastic bags.

Sophia McKinstry, a girl from a university in UK, has exquisitely made a “Special Sign for Women’s Periods” to call on people to break the taboo around menstruation, remove the shame and stigma, and urge the society to face women’s physiological periods squarely. The overall outline of the Special Sign for Women’s Periods is like a drop of blood. The upper part is mainly composed of rosebuds, which shows a curling-up female who is lying on her side. The hollow part showing a few bat totem elements combines with the red shadow below to express that the woman is on her period.

When talking about the chance for the creation of the Special Sign, Sophia McKinstry said that she initially just wanted to help girls with period discomfort by designing a special sign, for example, when others see a girl wearing this sign, they will know that she is on her period and may feel tired and uncomfortable. In some cases, she probably needs a little care and understanding like a hot drink for her when eating meals together or avoiding persuading her to drink wine. She saw a piece of news that Melinda Gates liked the Chinese swimmer Fu Yuanhui for her bravely smashing period taboo during the Rio Olympics and noticed various hot discussions triggered by the Indian film Padman. After that, she gradually realized that period shame is a common phenomenon in many countries. Menstruation is perceived as unclean or shameful by girls and other people, which can be seen in all aspects of our lives. Therefore, she began to pay more attention to the topic of menstrual shame.

Sophia McKinstry stated that she wanted to make people understand through her own way that menstruation is a normal and healthy part of life for women and the traditional idea that periods are dirty should be bravely broken. Female periods should be treated equally as other physical phenomena in the society and they should not be taboo. For this purpose, she “encourages people to abandon the traditional secular ideas such as ‘menstrual taboo’ and ‘ menstrual shame'”, and integrate “may every girl does not feel embarrassed or ashamed any more when talking about menstruation” as well as other concepts and appeals into the design concept of the Special Sign.

The Special Sign for Women’s Periods has become globally accepted to mark women’s menstruation and periods. It encourages women to break the taboo of “menstrual shame”, calls on the society to stop hating “menstruation”, and represents care and understanding for women on periods.

The small sign contains infinite power. We believe that it will promote a great spirit, end the long-standing discrimination, and arouse people’s courage to challenge the secular ideas and break taboos, just like the Olympic Rings and Red Ribbons.

May every girl on her period be treated tenderly!

Share
Facebook
Twitter
WhatsApp
Previous articleCardiac Remote Patient Monitoring Device Market to Reach US$ 680 Million with a CAGR of 7.9% by 2028
Next articlePU sole Market Growing Trend and Demand With a CAGR of 5.2% During Forecast Period 2028
RELATED ARTICLES
EIN Presswire